Orlando Magazine Honors Dr. Orlando Cicilioni: To Whom Roses Are Due

Once upon a time, in an enchanted kingdom named Orlando, there lived three fairy princesses named, Princess Chloe, Princess Brooke, and Princess Anabella. They have always suspected their father, Dr. Orlando Cicilioni Jr., was an enchanted prince. Little did they know that he is much more than that.

He is a celebrated doctor, 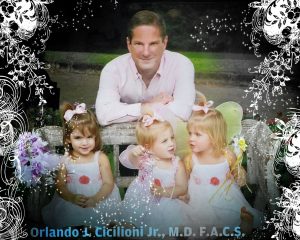 featured in this December’s prestigious Orlando magazine, as one of their selection of finest physicians in Orlando, 2012.

If we look through the eyes of Dr. Cicilioni’s princess daughters, as well as those of his other four children, we might also see him like a gallant prince of old. This is because we of the Orlando Cosmetic Surgery, LLC, know that Dr. Cicilioni is a real life hero to many of his patients.

For example, he is a hero to the open heart surgery patients who have benefited from his co-development of a world famous stenal procedure and surgical technique for repairing the breastbone after open-heart surgery.

If they could read the Orlando Magazine article, the three princesses would recognize his dauntless skill in the repair of over 250 cleft lip and palate patients on twelve missionary trips to Mexico with the Florida Hospital Shares Foundation. They would also understand the heroic vaue of his commitment to breast cancer patients.

They will share the appreciation of the patients at Orlando Cosmetic surgery who have benefited from his pledge to “raise the bar on expectations for post-mastectomy reconstruction.”

However, all of Dr. Cicilioni’s children will be content with treasuring their prince-doctor-father’s words that his number one joy in “off hours” life is being with his family.