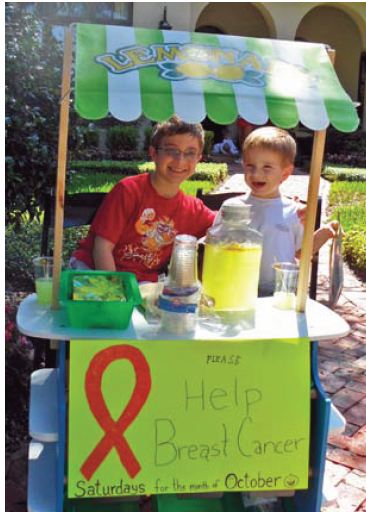 Orlando Cicilioni,’s sons (pictured) worked throughout the entire month of October to help raise money for the fight against breast cancer.  Orlando and his brother, Grayson, pictured at right, raised $250.00 and donated it to our own “Armstrong’s Army!”  The two boys were featured in the Park Maitland School monthly newsletter.

Young Orlando’s dad is Dr. Orlando Cicilioni, well-known plastic surgeon for cosmetic and breast reconstruction.  Doctor Cicilioni is also the chairman of the Department of Plastic Surgery for Florida Hospital.

He and Orlando’s mom, Lori are very proud of their son’s desire to lend support for this worthy cause.

The decline appears to be related to the drop in use of postmenopausal hormones that occurred after the Women’s Health Initiative study showed their use increased risk of breast cancer and heart disease [33-36]. Since 2003, the incidence of breast cancer has remained stable [31].  Read more about breast cancer.