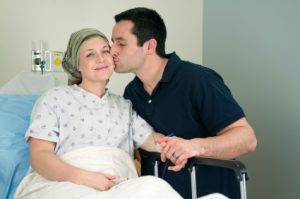 The purpose of radiation therapy is to decrease the risk of local disease recurrence, and it is utilized routinely in the treatment of breast cancer patients who undergo lumpectomy surgery, but it may also be given in some cases of mastectomy surgery as well.

Criteria for patients to have radiation treatment after mastectomy may include T3/T4 size tumors, positive margins, or four or more positive axillary lymph nodes.

Over recent years we have been seeing the criteria changing to include patients with even 2 or 3 positive lymph nodes in some cases.) While a history of having had radiation treatments is known to increase the risk of breast implant related problems, such as encapsulation, healing difficulties, and infection, there is new hope for autologous fat grafting to overcome some of these negative side effects of radiotherapy.

The theory behind this involves the potential for autologous fat to contain some natural stem cells in the mix, that may potentially rejuvenate the radiated tissue.

In a recent paper published by Drs. Salgarello, Voisconti, and Barone-Adesi, fat grafting to the lumpectomy site or mastectomy site post-radiotherapy was found to reduce radiation-induced complications with breast implants.1 Autologous fat grafting is a procedure that involves harvesting small quantities of a woman’s own fat utilizing liposuction technique through a small puncture incision, then after washing the fat cells they are transferred by syringe and needle injection into the mastectomy or lumpectomy site.

Autologous fat grafting during the course of reconstruction is already being done at many centers in the U.S., including Orlando Cosmetic Surgery, LLC. However, in the United States, fat grafting is usually done in the second or third stage of an implant reconstruction to enhance areas of thin tissue, correct asymmetries, or reduce visible rippling and wrinkling sometimes seen with reconstruction. What is different in Dr. Salgarello’s study is that the fat grafting was done prior to placement of the implant or expander device.

In the Salgarello study patients were treated with three rounds of fat grafting staged at three month intervals, beginning 6 months after completion of radiotherapy and at least 3 months after completion of mastectomy surgery. The usual amount of fat grafted per session was 88.6 ml. After the fat grafting was completed, patients then went on to have either expander placement or implant reconstruction. The authors found that with this fat grafting pre-treatment there was a very low encapsulation rate, very good to excellent cosmetic results, and a very high level of patient satisfaction. Though critics of the article may say the study size was small (16 patients) there was in fact a 15 month average follow up period and the results are very encouraging.